We Didn’t Start the Fire (Because There Wasn’t One)

I don’t know if any of you have ever been to a Center Parcs, but it’s a long tradition in my family that goes back roughly twenty years.  We’ve gone every year since 1995 and the experience doesn’t change much.  It’s a cheap(ish) holiday and you can drink as much alcohol as you’d like, with only your surrounding family to judge you.

We left the house at about 9 in the morning on a very cold Friday.  The thin hoodie I had on didn’t warm me up much, and I could practically feel icicles forming from my nose.  My sister probably had it much worse, forced to listen to my eclectic taste in music while being the taxi to Woburn Forest, just outside Milton Keynes.  Apparently, 2017 marks 50 years of Milton Keynes existing, so that was interesting to see signposted almost everywhere as we approached it.  Nevertheless, we were focused on one thing; getting there before everybody else.

After parking, we were told to wait as arrivals didn’t start until 3.  I took this opportunity to be the cool cookie I am and take some selfies with my sister and her companions, much to their dismay. But of course, I looked flawless as I always do; it’s very easy for me and my devilishly handsome smile.

We drove up and unpacked, and it was search and rescue time.  Like in a hotel, I immediately searched for the free stuff.   Free shampoos, free tea and coffee, free anything. Because Woburn is a recent build, the villas are new and state-of-the-art, so it was pretty swanky.  The rest of the day was spent watching TV, naming the squirrels that flew past the window and playing pool in the games room.

Saturday went off without a hitch, the lake was frozen, and it was pretty amusing to watch the ducks attempt to splash about in the small thawed area. 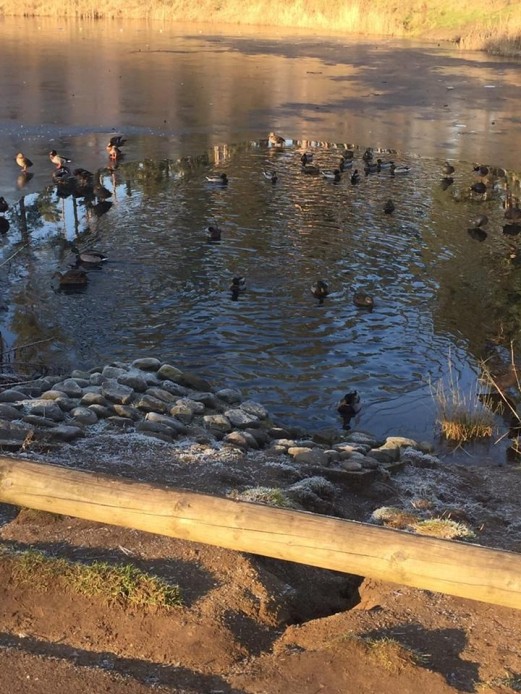 Did I mention it was cold?  I had two pairs of trousers on, which gave off the illusion of having toned legs.  Nothing a little alcohol and some Cards Against Humanity can’t fix.  Although my poor mum didn’t enjoy Jade Goody’s cancerous remains so much.

Sunday was the most eventful day, to say the least.  We climbed some very high trees, go ape style, and I thoroughly soiled my pants.  Afterwards, I was sent down a very fast zip wire that, in the middle of January, had icicles hanging from it.  I could feel every one as it approached my body, and my hairs stood as if they were trying to free themselves from my arctic arms.  After my heart rate returned to normal, I headed to the pool.

Here’s where I told myself I’d never leave the house again.  While I was casually splashing about with my butt stuck halfway in a rubber ring, there was an announcement;

People poured out (pun intended), and I had to follow.  About ten minutes later, the building was evacuated.  As you can probably guess, running down a pathway mid-January in nothing but a swimming costume and a shock blanket, being told to move in every which direction is certainly a surreal moment.  Sat in a restaurant, surrounded by damp people in the same predicament, I thought to myself, ‘I can’t wait to write this for The Lighter Journal.’  The worst part of the whole incident is that there was no fire, only an electrical fault.  It kind of kills the mood for going down flumes, so my family and I picked up our stuff, headed back to the villa and climbed into the oven.

After that, it was back to happy family memories and overeating.  Aside from the obvious flaws that occurred during our stay, it’s a very relaxing trip to the forest. The lighter I chose is green, because, well, it’s a forest.  It will remind me of another trip into our long history of memories that have occurred during our stays at Center Parcs.  It will also remind me of the non-existent flames that burned up (I’m on a roll) some indulgence time.  But, hey, life with no blunders wouldn’t be as interesting to write about.