HOLLY TRUSLOVE: The morning was early, the tickets expensive, and we were on a train.

It seemed like a good idea to spend the day in London with my best friend. We were up and we were on our way, but then I fell asleep. I did genuinely try to stay awake, but ended up asleep on Harry’s shoulder (a testament to how tired I was because we hate any physical contact that might suggest we’re, god forbid, friends.) Then, to wake me up, he poked me violently in the eye. 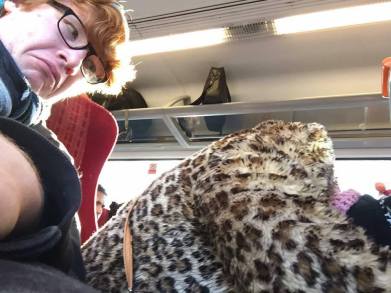 HARRY KIELY: Well, it wasn’t the most violent of pokes and it was intended for the nose. The people next to us seemed rather interested when Holly began to scream about poking her in the eye.  We arrived in London around 10:00 AM, and headed directly to Covent Garden – specifically for the Moomin shop.  Of course, we spent money in there, simply because that’s who we are as people, followed by a donation to a busker who would give Beethoven a run for his money.

HT: I have literally never seen the Moomin shop that empty, it was great. After, we went into a tea shop and I bought a packet of tea that was far more expensive than I realised, and, since I was at the till by the time it dawned on me, I couldn’t back out. (It was quite nice tea, though, and I am getting through it at a pace.) Following the murder attempt on my wallet, we decided it was time for something to eat.

HK: Let me tell you, we died and went to pancake heaven.  Of course, Holly being the bag of garbage they are, wanted a booth table.  We had to inconvenience the poor, very attractive waiter to move us.

HT: Okay. I didn’t just want a booth, I wanted a place where we had access to a plug socket or my phone was going to run out of battery because someone didn’t have their portable phone charger at full battery. Anyway, after a delicious pancake breakfast and a lovely red teapot full of English Breakfast, we went on our way. The lighter that we chose we surprisingly didn’t squabble over – it was simple and black and sleek, like the city of London itself. In fact it looked rather like a skyscraper silhouetted on the sunset of the city which we would see later that evening. We could have picked a tacky one- of which there were no end, but we figured something classy would do our adventure in London justice. So we took advantage of the National Gallery’s majesty and snapped a few shots there.

HK: We started at the gallery with good intentions, to view the art and become inspired.  Within 15 minutes, we were snapchatting the photos with some hilarious captions. 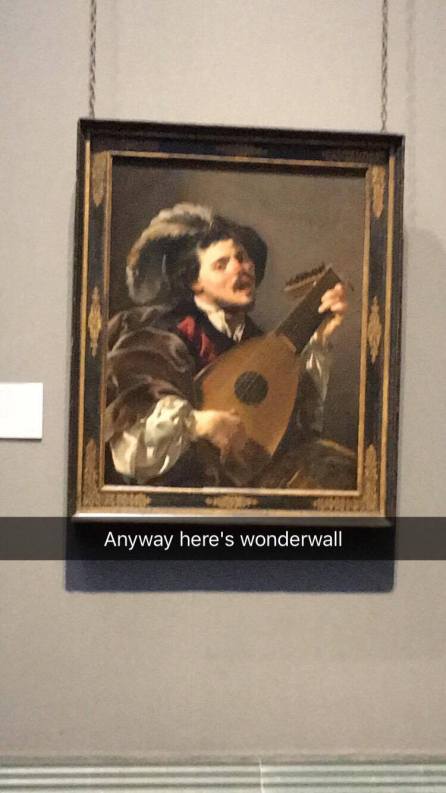 That being said, I haven’t personally been to the National Gallery for years, so to go back and view some of the art brought back some nice memories of being back in school.  Nice enough, anyway.  We then departed again down to Leicester Square.

HT: Okay, I feel like we should have gone more into the details of the fact we got super-lost in the National Gallery, but we’ll move on to Leicester Square, where we sat on a little wall and pigeons began to swarm Harry. At least two dozen of them. I was laughing so hard, and he was just screeching at them. I could have helped. I did not.

HK: No, Holly did not help, but instead decided to coin the term ‘Pigeon King.’  While still being swarmed, they screamed ‘Come, his faithful subjects. Come!’  At this rate, we were sure that the attention of the pedestrians was turned away from the street entertainment to us – the woman sat next to us didn’t seem impressed. After the pigeon debacle, we headed to the land of dreams; the M&M Shop.

HT: You hated the M&M shop. You said it smelt too badly of M&Ms.

HK: Well, maybe I stretched the truth a little.

HT: So, we headed off to Oxford Street. I went in search of a specific pair of Doc Martens, and found my efforts fruitless. So we went to Primark, which is where all trips outside eventually end up. We bought Harry a coat, and then left. We couldn’t linger. There wasn’t room to linger. Primark is a battle zone.

HK: After being squashed into the walls of Oxford Street, we took the underground back to Waterloo, a far less crammed experience. It was dark by the time we were back in Winchester, but it’s safe to say that you shouldn’t go to London without taking out a second mortgage and you should definitely dress warmly if you’re going in the middle of the winter. 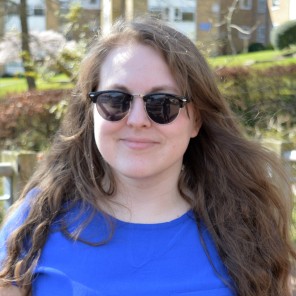