The first time I went to the Chesil Theatre, it was to see a production of The Seagull. I am not a huge fan of Chekhov, especially that particular play – it’s all a bit depressing, isn’t it? – but the cast was brilliant and the play itself was wonderfully reimagined. In true Chekhov fashion, my encounter with the Chesil was its own gun – a year later, I was reacquainted with the theatre, as I was lucky enough to be involved in their 10 x 10 production for 2016, a series of ten different ten minute long plays, this year inspired by David Bowie. And, as I spent more time there, I considered what a lovely place it could be to write about.

The Chesil was often something that I passed on my way into town. The theatre is a located in a renovated 12th century church which in Winchester – with all of the city’s medieval architecture – can sometimes sink into the background. It doesn’t help that the place is tiny. At most, it seats about 75 people in the auditorium, and while that might not seem like much, it’s everything but when you’re up on the stage and every pair of eyes looking up at you matters.*

The inside of the theatre is also very sweet – the reception room isn’t huge, but there’s a bar and a television screen so you can keep an eye on the stage while you have a drink. Most importantly, all along the walls and up to the ceiling, there are photo collages of previous shows – and there are dozens. Each collection has the show name and the year it was performed, and while the earliest I can remember seeing is about 2002, the Chesil’s history stretches back over 150 years, so it’s hard to imagine all of the actors who have treaded across the floorboards of this place.

What I most want to talk about is the stage door. The theatre is located right off a main road, and on the side of the building is this amazing slab of red. It’s located in a dip so even I – a tiny five foot goblin – have to duck in order to get into the theatre, but there is just something so lovely about it. The visual loudness of a red door in a sea of grey bricks that seems to shout as loudly as it can, ‘Theatre is still here! We’re alive and kicking, thank you very much! The show must go on!’

The lighter I chose – an elegant, red little thing – is just as bold and beautiful as everything the Chesil stands for. So look at this stage door and remember the phrase ‘small but perfectly formed’.

*apparently, Ian McKellen came to a performance two years ago. I did keep an eye out, but no such luck this time. 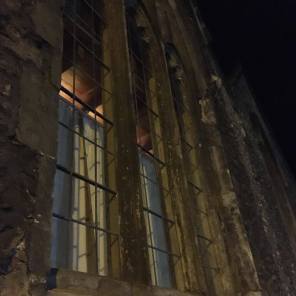 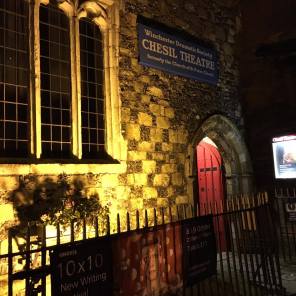