Party on down in Uckfield Town

I live in Uckfield, a town where the temptation to add an extra consonant to the street signs proves far too tempting for many a youth. It’s a place a lot of us locals complain about – or maybe I’m just friends with the pessimistic ones – but we do all love it, really. One of the many reasons is the Uckfield Carnival.

An annual event, the carnival is organised by Uckfield Bonfire Society, a non-profit organisation that ‘burns for charity’ – ah, pyromania, that classic fundraising technique. But hey, it works.

My accomplice this year was the wonderful Amy, back from the dead after her encounter with geese in Buxted Park. As we waited for the carnival to arrive, we feasted on Maltesers and rainbow belts, listening to the popping of fun snaps as frenzied children threw them at the pavement. As we chatted, we absent-mindedly fiddled with the tuppences in our pockets, harvested from Brighton Pier that afternoon and already tainting our hands with the smell of copper. 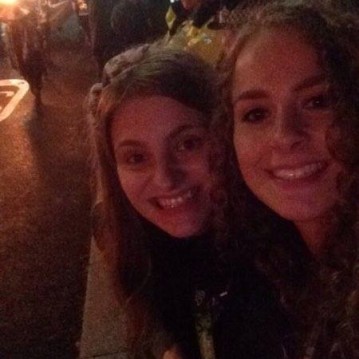 As a child, the carnival was always magical. I remember standing in my pink coat, staring down the street and waiting. You always heard the music first, the drummers and brass bands. Then, in the distance: the orange glow of fire, little specks of it, drops of colour in the darkness. As the parade got closer, you could begin to make out the costumes; pirates, Tudor Queens, cowboys and pearly kings, all of them carrying flaming torches that my mum said made us smell like kippers. 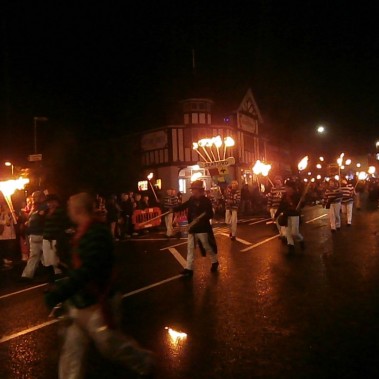 In secondary school, I joined a carnival group called Spiritus as a dancer, and for the first time I got to be in the parade. We all wore hideous shiny red dresses with hooped bottoms that made us look like lampshades, and I’m pretty certain were made of a flammable fabric – can you see the issue? – but I relished the experience all the same. 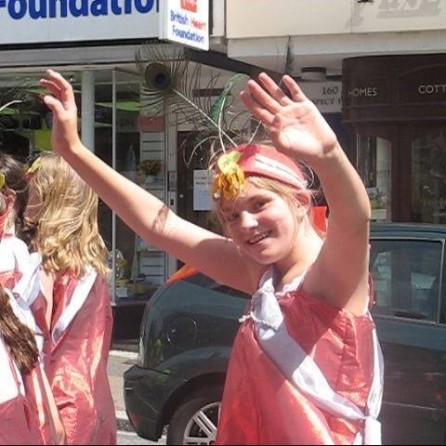 The next year, our outfits were less walking soft furnishing and more children’s TV presenter, with red waistcoats and – thankfully – trousers. We’d spent months learning choreography inspired by steam trains (no, I cannot be bothered to explain why), but our leader, a lovely boy called Jake who we all adored, decided it would be more fun to copy the dancers in front of us who were doing Thriller. We were a pale imitation of them, of course, but at least we were enthusiastic. One of my favourite childhood memories is standing in the street, surrounded by flames, dancing Thriller in the rain as the road flooded around us. Amazing is an overused word, but it was simply that.

After that, most of the older dancers left to focus on their education, replaced by a gang of babbling year 7s who did more arguing than dancing. We soon stopped being invited to events and Spiritus dancers were no more. I still utterly despise those pissing year 7s for ruining the one club I ever loved.

But in 2016, Amy and I could see the flames glowing at the bottom of the high street. Soon enough, they were there in the street beside us, the flames warming our rain-cooled cheeks.

A pirate threw his fading torch to the side of the road and it landed at our feet, sparks scattering across the dark tarmac and fading from orange to black. It evoked a childish temptation in me, the urge to touch it in naïve curiosity. I resisted.

We heard the rattle of collecting buckets before their holders appeared, and we were ready with a handful of tuppences. We threw them into the buckets of a bumble bee, a Scotsman and Minnie Mouse. I admired them with a respectful envy – I was a collector in sixth form, and I miss it greatly. It doesn’t sound right, missing the opportunity to walk for miles, in fancy dress, whilst carrying a bucket of coppers, probably in the pouring rain. But it was all worth it to see a child unable to contain their excitement at the prospect of putting five pence in the pirate lady’s bucket. It was always worth it for that.

But once again, I digress from the spectacle of 2016, where the grand finale was taking place. The parade came back down the high street, torches swapped for glowing fireworks that spat sparks of red. Smoke rose up from them and spread in the darkness, people silhouetted against it as they walked away. 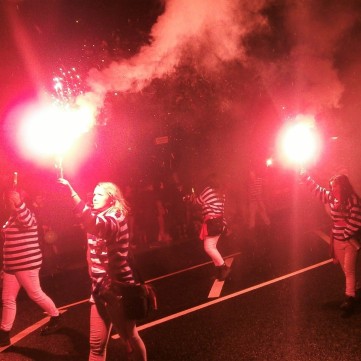 Although seemingly impossible to capture such an event in a lighter, I think my vibrant offering is a jolly good attempt. The colour of fire and covered in bright patterns, it seemed a fitting tribute to the evening.

We watched until the flames disappeared and the smoke cleared, and then it was time to leave. Our coats smelt of smoke and stale rain, our hands of copper and remnants of Malteser. We mocked the event on our way home, like hormonal teenagers sneering at their parents. But, as always, we admitted our love for it in the end. 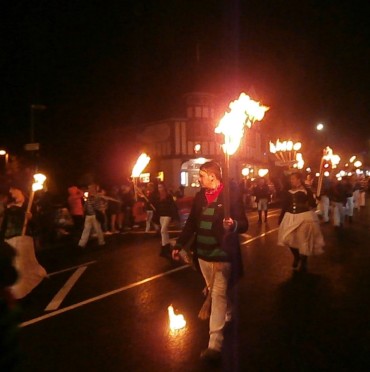