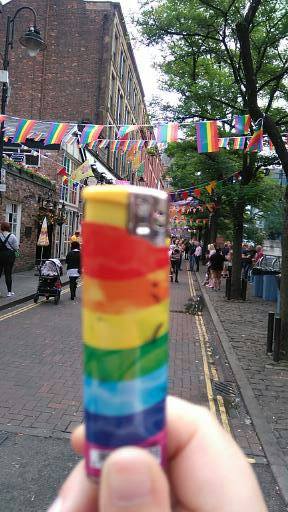 Finding Home at the End of a Rainbow PT.1

For me, Manchester is the city that has it all. It’s vibrant and busy and big and diverse. There’s so much to do that in all the years of going into Manchester city centre I’ve still not done it all. This is my home city and I would recommend it to everyone for at least three visits. It’s got it all – and for one magnificent week, one glorious shining week at the end of August, everyone’s gay.

I wrote about my trip to London Pride in June. Although I had fun at London, it was too busy, too impersonal and too far away from home. Manchester Pride is different in a way that’s hard for me to put into words, especially for those of you reading this who’ve never felt any inkling of those big queer feelings I’m constantly plagued with.

Imagine this: you live miles away from home (the other side of the world, in fact) and no one speaks the same language as you do. No one eats the same food or celebrates the same holidays. People don’t even dress like you. And then you come home, to where the weather is familiar, where you can talk to anyone, eat as much food as you want, drink and joke and laugh with people on the same level as you. It’s Home. It’s Happiness. It’s Manchester Pride to me. It just turns out that my family is forty-two thousand strangers.

This year marks my fifth year at Pride. The first year I went with a friend of a friend and I kissed a girl, whose name and face I forgot; but without her I’d have never come out to my family and friends the coming year. In the four years since, I’ve been going with my partner in crime, my best friend – and for a while, the only other gay person I knew – Ronan. Through four years of experimenting and dabbling, we’ve got the Pride schedule down. It goes like this:

We stayed at the Mercure Manchester Hotel. It was only £50 each for the one night (with a free breakfast), right near Gay Village and way too fancy for two part time 21-year-olds to be staying in. The staff were lovely, taking one look at me in my HOMOsapien shirt and asking if I was looking forward to pride.

Most of my Friday was lost to a box of wine, half a bottle of Absolut Vodka and some tequila shots. Ronan ironed his shirt for whatever the night held for us and I drank boxed wine to a Pointless drinking game. I do remember some things, like going to the Main Stage to see Sophie Ellis Bextor. I remember dancing and laughing and loving every minute I was out. I remember queuing for the toilets but not minding the wait because I’ve never met an unfriendly person there. There’s evidence on my phone of sitting above the canal for my traditional annual cigarette over the water. It seems it was here that I tried to take a cute lighter photo with both of us holding the lighter, which just didn’t work. The picture failed and is unusable, but it’s funny regardless.

We came home with matching jackets and poured more drinks that we never finished.

Ronan had to leave for Leeds Festival early Saturday morning, so we managed to wake up and get the free breakfast that came with the room. Now on my own and feeling terrible, I made my way over to Café Nero for a smoothie and tried to think for something to do for the next three hours before the parade started.

Now, I’m sure I’m not the only person who’s almost vomited in the streets of Manchester (and I’m sure I won’t be the last) but in a huge effort to not do that, I made my way over to the cinema – a dark quiet place where I didn’t have to interact with a more alive person – to watch Ghostbusters.

Next time: The Parade, The Extortionate Markets and The Heart of Manchester Pride

For more pictures of Rach’s Manchester Pride, check out our Instagram!