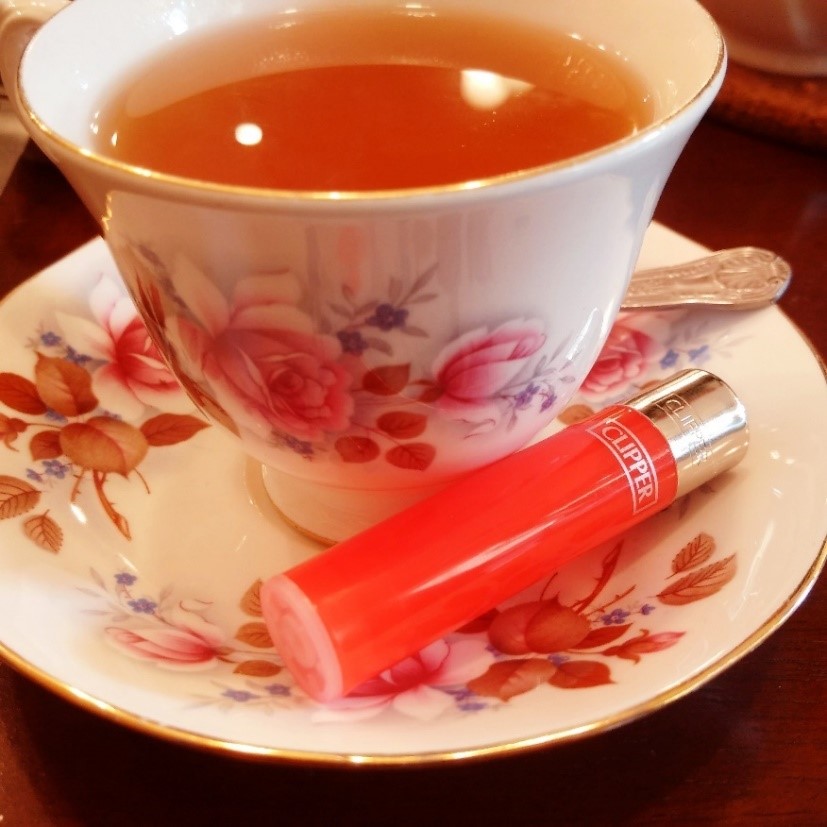 An adventure, comrade! Today I went to the historic city of Salisbury, for the simple reason that I had never been there before. I seem, somehow, to have bypassed the place growing up, I think in part because I always assumed Salisbury to be too similar to my native Winchester.

Today, however, was a desperate day. With my MA looming, my bank balance low, and a monstrous tuition debt breathing down my neck, my finances were in a dire state. Hence, an attempt to prove that it is possible to have an adventure for less than twenty pounds.

I walked to the train station to save on the bus fare, packed a lunch, and was prepared to walk around Salisbury in a sensible pair of flat shoes. In short, I was determined to buy nothing but a lighter (and perhaps a cup of tea).

My suspicions were correct. Salisbury is very much like Winchester. A somewhat hoity-toity Christian city with a historic centre, boasting a grand cathedral and a lovely walk by the river.

However, the blustery cathedral grounds left me wondering if I had stumbled onto the set of a surrealist film.

All in all, the Sophie Ryder exhibition was rather like Pink Floyd meets The Wind in the Willows. I still haven’t figured out the link between the sculptures and the cathedral grounds on which they sit. Perhaps there is none, but by a surprising twist of fate the giant metal hand by the cathedral entrance was a mere appetiser for the fifty odd greyhound-sized hares sitting in the first passageway.

I remained confused, but the ‘Dancing Ladies’ in the photo above made me smile. 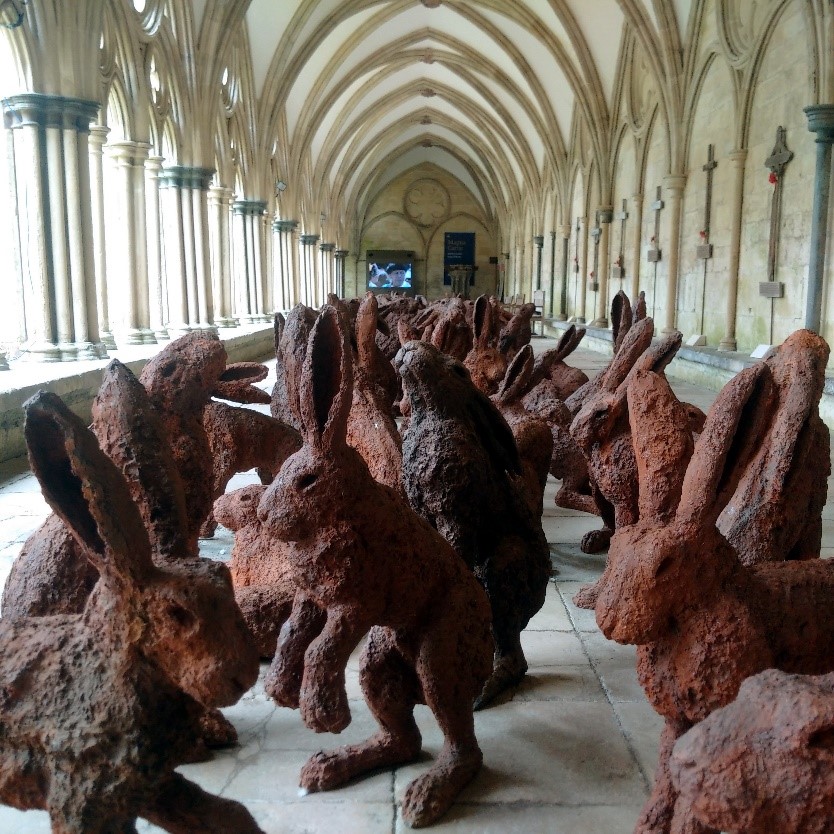 The cathedral itself was as magnificent as I had anticipated; a veritable fortress of intricate carvings and history. I have never been one for religious practise, so I suffered a certain thrill at my own fraudulence when I stepped across the threshold. My bright red coat made me feel especially like a trespasser in the cream stone setting.

I have never had a spiritual crisis, for the simple reason that my beliefs have never swayed from indifference to both sides of the argument. My mother and I went to church once when I was seven. We dressed in our best clothes, attended a single service, and never returned. The only notably religious friend I have ever had came from a zealous Catholic family, but we went our separate ways – I think partly because my faithless background was considered a bad influence.

All in all, God and I have never had much to say to each other. However, religious buildings are full of ghosts, and on holy ground I am always aware of the spirituality around me. Today was no exception.

Having seen the Magna Carta and read the memorials on the courtyard walls, I left the cathedral.

I spent the afternoon window-shopping the maze of the high street, and went for afternoon tea in a chocolate shop. It was run by a lady who in figure resembled the teapots on the shelf. She had an extremely high-pitched voice, and I could hear her no matter where she went.

The place was so small that I felt rather like Alice after the ‘eat me’ cake as I scrawled a few pages for my novel. Sampling the organic blend jasmine green tea was a mistake, but I was soon distracted by a party of loud German tourists. Among other faces were three senior citizens, much annoyed by the ruthless, authoritarian antics of a certain ‘Margaret’ in their church group.

The chocolates were beautiful, lined up liked jewels in a pawnbroker, but they were ludicrously overpriced, much like the fine leather shoes and ornaments sold throughout the town. If I took anything from today, it was a firm awareness of how much money I don’t have compared to the people of Salisbury. 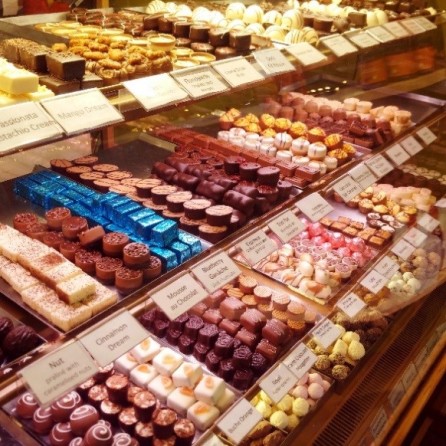 To conclude, I shall betray my hometown by saying that I found Salisbury Cathedral more interesting than Winchester (even if you have to pay to see the better part of it).

As I travelled home I thought about ghosts, and the memorials in the cathedral courtyard. One stayed in the forefront of my mind – a memorial to a traveller of my own age. The simple verse, ringing with the grief of cheated loved ones, followed me. Despite the centuries that have passed, I continued to feel a strange, distant sadness.

I wondered what it would be like to lose your life on the cusp of beginning it, and felt blessed for my own existence. 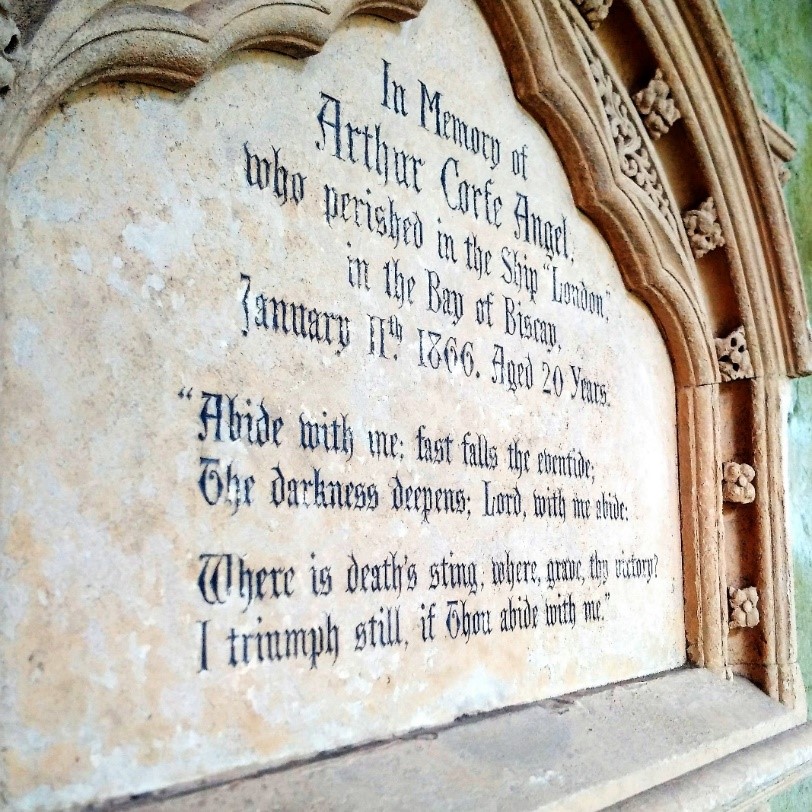 “Abide with me; fast falls the eventide;

The darkness deepens; Lord, with me abide.

Where is death’s sting, where, grave, thy victory?

I triumph still, if Thou abide with me.”